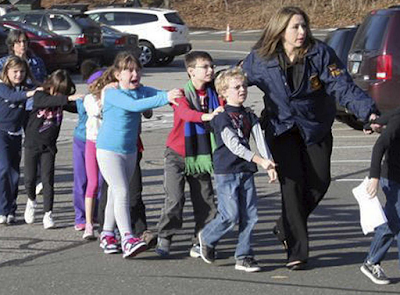 CHILDREN VACATING SANDY HOOK - WHERE ARE THE OTHER 200+ KIDS?
Memory Hole Blog
by James F. Tracy

A man is offering $25,000 to any party who can substantively disprove his claim that the December 14, 2012 Sandy Hook Elementary School massacre was staged. Taking to YouTube as a platform one Joe Jones of Kentucky thinks the tragic incident was carried out with the aid of “crisis actors” at a building “decommissioned several years prior to the day of the event” because of “asbestos and mold.” By late 2012 “the building was just being used for storage,” he says in the video.


Sandy Hook was fabricated by somebody who decided, “Oh, we’re going to do a school shooting, and all of the fake actors who play out the parts of all of these victims are going to become filthy rich from fools who are sending money to them–millions and millions of dollars.

Jones addresses defenders of the official Sandy Hook narrative, who he derisively refers to as “liberals,” encouraging them to come forward with solid evidence of the shooting’s authenticity and demonstrate the sincerity of their claim by matching his $25K offer. The combined funds would be held in an escrow account while a third party private investigator–paid for by Jones– verifies the submitted evidence. If the document(s) prove valid the individual will then receive the $50,000 account balance.

For better or for worse, television has been how many see the world.

It is a “mediated” experience that shows the viewer exactly what the programmer wants him to see… and believe.

Television has been a remarkable tool of manipulation and indoctrination, and has now created several generations of zombies, morons and dullards here in America.

But poorer parts of the world do not have these things, or at least typically do not have such a close experience with them.

Now, that’s changing. Mexico’s government just spent approximately $1.6 billion dollars to make sure nearly everybody is exposed to  the flickering suggestion of the television set – and all that high definition broadcasts and flat screens have to offer.

Email ThisBlogThis!Share to TwitterShare to FacebookShare to Pinterest
Labels: brainwashing, mind control, television is a tool of manipulation, They Live

Unraveling the Mysteries of Flight 11 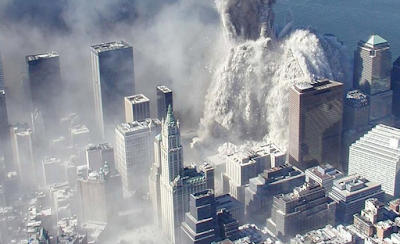 I’ve been working on an extensive blog post called “9/11 for Beginners.” Although my 2013 book Truth Is a Lonely Warrior has a long chapter on 9/11, I have not written a blog post on it, because so much good material is already available from other online sources.

However, since fresh insights and information have emerged in recent years, and because we can never really say too much about this devastating crime, I felt I should contribute what I can to the discussion, in hopes of awakening additional people.

In the course of writing, I discovered a single piece of research that is so thorough, objective and edifying that I believe I should devote a post to it. The research is contained in a forum thread called “Fog, Fiction and the Flight 11 Phone Calls.” 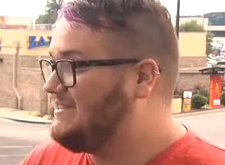 ONE OF THE THREE PEOPLE TERRORIZED IN THE NASHVILLE THEATER, SO SCARED HE CAN'T STOP SMILING

Welcome to this week’s installment of the “Daily Shooter,” another episode tailormade for American audiences…
21st Century Wire

According to authorities, a man armed with a gun, pepper spray and a hatchet, was killed Wednesday afternoon after a fire fight with law enforcement officers in a movie theater outside Nashville, Tennessee.

Authorities made quick work of the timeline of events explaining the use pepper spray on three apparent victims, but glossing over other details such as the hatchet and ‘hoax explosive device’ strapped to the alleged shooter, whose identity was withheld for a short period after the incident. 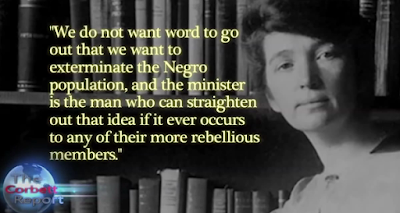 WRETCHED EUGENICIST AND DARLING OF THE ELITES, MARGARET SANGER

Although the likes of Hillary Clinton, Barack Obama and Bill Gates are happy to sing its praises (or perhaps because they are), Planned Parenthood has a racist eugenicist past that it would prefer to sweep under the rug. The bigger problem for the organization, though, is that the past isn't over and the public is beginning to discover the real driving force behind this globalist institution. Join us this week on The Corbett Report as we pull back the curtain and expose Margaret Sanger's monstrous offspring: Planned Parenthood.