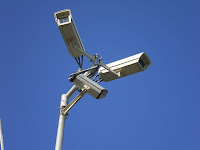 It’s tough being an imagery analyst for the U.S. military: you’re drowning in pictures and drone video, with more pouring in endlessly from the tons of sensors and cameras used on planes, ships and satellites. Sifting through it to find roadside bombs or missile components is a time-consuming challenge. That’s why the Pentagon’s blue sky research arm figures that cameras ought to be able to filter out useless information themselves — so you don’t have to.

Darpa announced yesterday that it’s moving forward in earnest with a program to endow cameras with “visual intelligence.” That’s the ability to process information from visual cues, contextualize its significance, and learn what other visual data is necessary to answer some pre-existing question. Visual-intelligence algorithms are already out there. They can read license plates in traffic or recognized faces (in limited, brighly-lit circumstances). But the programs are still relatively dumb; they simply help collate data that analysts have to go through. Darpa’s program, called Mind’s Eye, seeks to get humans out of the picture. If it works, it could change the world of surveillance overnight.

Full Story
Posted by Intercept at 4:00 PM No comments:

These are cropping up in Walmart and Target parking lots. Future prison yards?

Posted by Intercept at 11:02 AM No comments: