Over a year has passed since the reported Sandy Hook Elementary School shooting transpired and some, like independent investigator Wolfgang W. Halbig, want answers. In fact, Freedom of Information Act (FIOA) requests on the matter, filed legally by Halbig, have even been denied, which may open up a new can of worms for officials as Halbig is determined to press for the arrests of conspirators that were involved in the elaborate hoax.

You see, Wolfgang W. Halbig is not just some conspiracy theorist flaunting his personal views about the Sandy Hook school shooting on YouTube like we saw in hundreds of other YouTube videos which surfaced in the public domain in the days and weeks following the reported shooting. Not that there is anything wrong with any of the videos that were made or any of the questions that were previously asked–but simply put, Halbig has credentials most others don’t. In fact, Halbig has an extensive background in education and law enforcement that has led him to believe that the Sandy Hook school shooting was indeed faked as no technical aspects of the crime make sense.

Halbig, who runs the website ChildrensSafteyInstitute.com, is an expert witness in the field of school safety and security and has also testified before the Congressional Commission on School Safety and Security. Halbig is the executive director of the National Institute of School and Workplace Safety and was even a former Florida State Trooper and a U.S. Customs agent, giving him his expansive background in education and law enforcement.

Halbig has also investigated the Columbine school shooting which took place in Colorado, back in 1999.

Amazingly, after a rather thorough and concise investigation of the Sandy Hook school shooting, Halbig concluded the following:

“In my professional opinion, [Sandy Hook was] a scripted event [...] in planning for maybe two, two and a half years.”

Recently in a radio interview with American Free Press’ Dave Gahary, Halbig pointed out a long list of problems that he has with the official Sandy Hook story as none of it adds up. Washingtons’ Blog provided a list of Halbig’s concerns:

*law enforcement parked 1/4 mile away upon arrival. Why didn’t they rush to a heart-wrenching emergency if it really occurred?

*no trauma helicopters were ordered. This is unheard of for an actual emergency.

*no paramedics were allowed in the school. This is unheard of.

*officials refuse to say who declared all 26 people dead. By law, this must come from a doctor. This refusal of so much basic information indicates lies and cover-ups.

*this “event” included a traffic sign lit with the message, “everyone must sign in.” Officials refuse any comment on this element that would be present for a staged event/drill.

*porta potties were on site; again with no comment by officials and consistent with holding a staged event.

*no names were listed for the 26 children and chorus director at the 2013 Super Bowl event in honor of Sandy Hook. The children resemble the alleged shooting victims. It’s unimaginable to not list these names for such a huge deal.

*no lawsuits filed by parents for negligence against school district. This is unheard of.

*a shooter with Aspergers would have poor motor skills and muscle tone – how did he carry all the gear and shoot with such precision? This combination is impossible to imagine.

*2 homicide investigators threatened Mr. Halbig for making inquiries consistent with his professional duties to learn about this event for future school safety.

*Newtown Public Schools won’t return any calls. Mr. Halbig says this non-cooperation to contribute information for other schools’ safety is unheard of.

*the FBI classified the report on Sandy Hook. This has never been done before, and indicates a cover-up of all the evidence that this was a staged event.

*radio transmissions are consistent in tone and content for a drill, not an actual emergency.

*multiple weapons reported at a limited crime scene were never found. This is not credible.

*law enforcement sent a kindergarten girl from the hall to stay at the crime scene of room 8 to be alone with dead bodies. This is a ridiculous claim that demands investigation and answers.

*no parents viewed the bodies of their children. This is also unheard of.

*no documents are being released via Freedom of Information Act requests. This is unheard of.

*trauma services were never requested. This would never occur.

*tearing down the school is consistent with destruction of evidence, given the HUGE gaps between official accounts and the evidence.

*there’s zero evidence that a bio-hazard company was contacted to clean blood, bodily fluids, and officials refuse comment. This is impossible. Mr. Halbig’s inquiries of who installed the school security system has been met with silence. This is unheard of to not get this information to improve other schools.

To no surprise, Halbig was recently visited at his residence by a pair of Florida homicide detectives trying to intimidate him to stop his Sandy Hook investigation.

Halbig maintains he has done nothing wrong and has even stated how he followed all of the legal and proper procedures pertaining to the FIOA requests he filed. Halbig also said that he has not threatened or harassed anyone who he has called pertaining to the investigation.

Sandy Hook; GAME OVER: NO Deaths NO Victims in Official Record

The Sandy Hook shooting official narrative is now dead. We have seen in previous films how the Newtown school “shooting” was interconnected not only to the CIA, but also that Dawn Hochsprung – a supposed ‘victim’ of the event – is closely related to the family of a key propagandist. This propagandist AND Hochsprung are secretly and closely related to Peter Lanza – and therefore to the entire “Lanza” family!


While some genealogy websites list the ‘official’ Sandy Hook victims in database searches, it was discovered that NONE of the “deaths” were actually traceable to the town of Sandy Hook in Fairfield County, Connecticut. Why? Inconsistencies in the various proprietary databases suggested TAMPERING WITH THE RECORDS as the cause. Indeed, it has been revealed that a systematic effort was made about one year before the “massacre”, to block or limit public access to such records!

In this document, you will see the results of a painstakingly thorough search of the ORIGINAL Social Security Death Master File for the Sandy Hook “victims.” The results are shocking. A great deal of information is made available, so anyone can verify the result for themselves. The Boston Marathon “bombing” taught us much about how the fake death industry works – particularly in connection with Sandy Hook (The Fake Death Industry). Here, we can see it in action, with the people who put it to use. 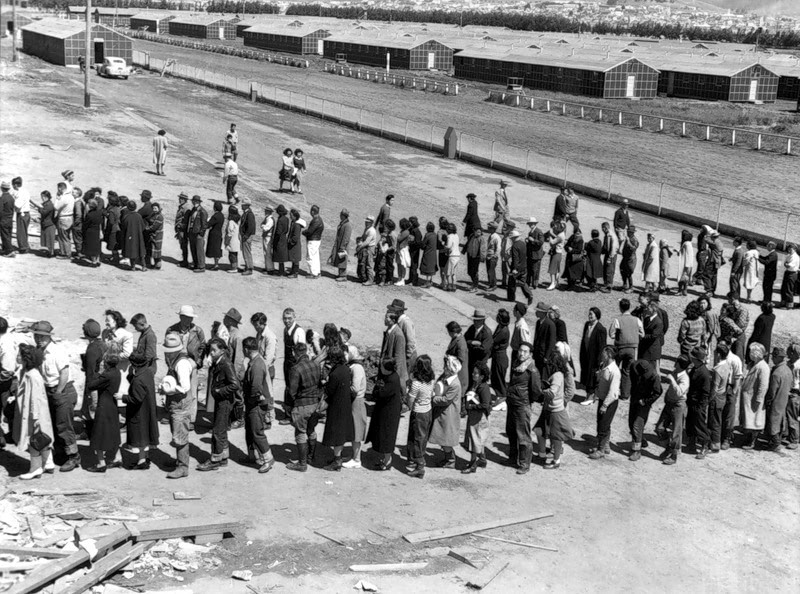 Americans exit train cars and are “evacuated” into the fenced compounds that would be their new homes. (Source: Dorthea Lange, 1944) A distinguished member of the U.S. Supreme Court gave a sobering reminder of how history can and likely will repeat itself when the conditions are right. Justice Antonin Scalia said that he would not be surprised if Americans were once again imprisoned in concentration camps by the federal government.

The 77-year-old justice was answering questions after giving a classroom lecture to a group of law students in Honolulu. One student asked about the deplorable 1944 Korematsu v. United States decision, in which the U.S. Supreme Court verified the constitutionality of the president ordering the mass-imprisonment of Americans in the name of national security.

Scalia cited the wartime “panic” as a reason Americans accepted President Franklin Roosevelt’s hostile treatment of citizens of his own country.

As the Associated Press reported:

“Well of course Korematsu was wrong. And I think we have repudiated in a later case. But you are kidding yourself if you think the same thing will not happen again,” Scalia told students and faculty during a lunchtime Q-and-A session.

“That’s what was going on — the panic about the war and the invasion of the Pacific and whatnot. That’s what happens. It was wrong, but I would not be surprised to see it happen again, in time of war. It’s no justification, but it is the reality,” he said.

The Korematsu case stemmed from President Roosevelt’s Executive Order 9066, which divided the country into “Military Areas” and in a real sense instituted martial law in the United States. Control of civilian territory was granted to to military commanders and the Secretary of War, who were authorized to take any freedom-restricting actions they deemed necessary to secure the homeland.

A U.S. Soldier stands ready to shoot any who would try to escape FDR’s concentration camps. (Tule Lake, California)

In enactment of the order, several segments of the U.S. population were labeled as “enemies” or “enemy aliens.” They were: (1) people suspected of “subversive activities” (which included speaking against the war); (2) Japanese aliens; (3) American-born Japanese; (4) German aliens; and (5) Italian aliens.

These so-called enemy groups were ordered to report to military prison camps for an indefinite sentence — a process that was dubiously referred to as “relocation” or “internment.” The reality was that the targeted individuals were stripped from their homes, their lives, their jobs, their families, and their freedom and placed into cages surrounded by barbed wire and U.S. soldiers who were prepared to shoot them.

Fred Korematsu was born in the United States, and as such was considered a naturally-born U.S. citizen who had two parents who were from Japan. Even though his loyalty to the USA was not questioned, the President had labeled him (and 120,000 others) as an enemy. Korematsu, who resided in Military Area No. 1 (California), was one of the few who did not report to the prison camp to which he was assigned. The government’s response was to have Korematsu hunted down, arrested and convicted of disobeying military authorities.

“It was wrong… But you are kidding yourself if you think the same thing will not happen again.” - Justice Scalia

The Supreme Court upheld his conviction, ruling that the 5th Amendment guarantee of “due process” did not apply, and that his conviction was allowed to stand. The needs of homeland security were considered to be preeminent over individual rights. To date, the decision has never been explicitly overturned.

Scalia’s statements would suggest that its legal precedence matters less than many would think. The Latin phrase he quoted, “Inter arma enim silent leges,“ dates back over 2,000 years and has been proven true in every culture since. During times of crisis — especially during great wars — people are naturally prone to embrace government efforts to empower itself in the name of security and order. Americans have proven this maxim to be true many times over, notably with the mass roundup of political prisoners during the American Civil War, World War 1, and World War 2.

“The reality,” as Scalia pointed out, is that the next time Americans feel great fear of a foreign threat or a terrorist, they will not only accept the destruction of civil rights — they will demand it. 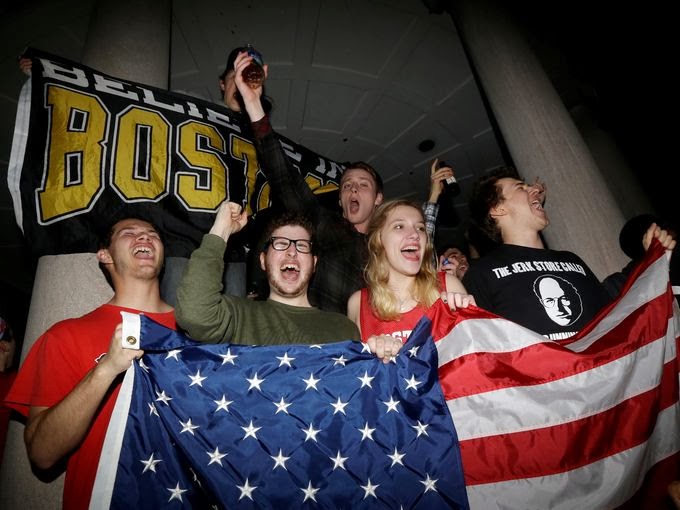 Crowd of dummies singing praises to the government after locking down Watertown, MA, during a 2013 manhunt. (Source: Julio Cortez, AP)
Posted by Liss at 12:52 PM No comments: